Beaver-inspired wetsuits in the works 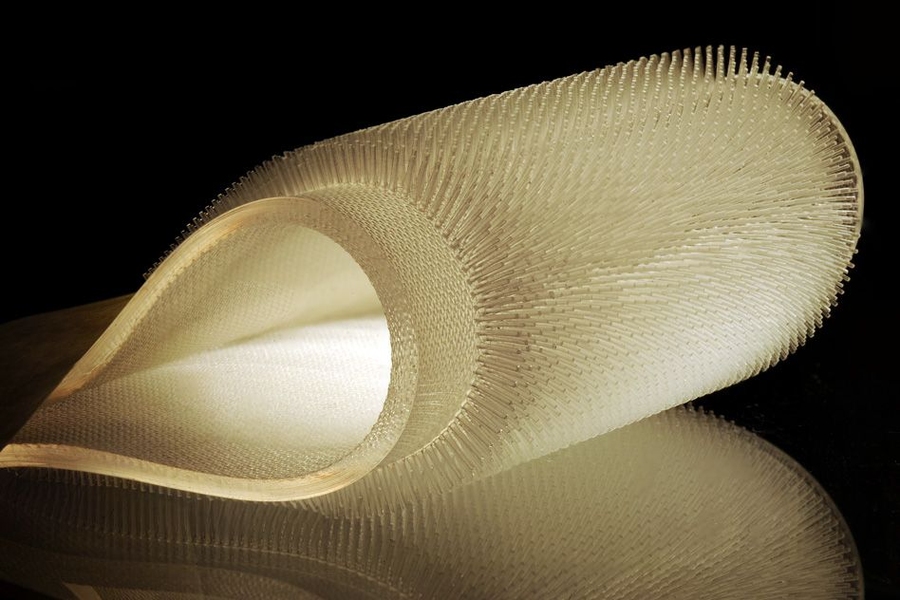 “We are particularly interested in wetsuits for surfing, where the athlete moves frequently between air and water environments,” says Anette (Peko) Hosoi, a professor of mechanical engineering and associate head of the department at MIT. “We can control the length, spacing, and arrangement of hairs, which allows us to design textures to match certain dive speeds and maximize the wetsuit's dry region.”
Credits:

Beavers and sea otters lack the thick layer of blubber that insulates walruses and whales. And yet these small, semiaquatic mammals can keep warm and even dry while diving, by trapping warm pockets of air in dense layers of fur.

Inspired by these fuzzy swimmers, MIT engineers have now fabricated fur-like, rubbery pelts and used them to identify a mechanism by which air is trapped between individual hairs when the pelts are plunged into liquid.

The results, published in the journal Physical Review Fluids, provide a detailed mechanical understanding for how mammals such as beavers insulate themselves while diving underwater. The findings may also serve as a guide for designing bioinspired materials — most notably, warm, furry wetsuits.

“We are particularly interested in wetsuits for surfing, where the athlete moves frequently between air and water environments,” says Anette (Peko) Hosoi, a professor of mechanical engineering and associate head of the department at MIT. “We can control the length, spacing, and arrangement of hairs, which allows us to design textures to match certain dive speeds and maximize the wetsuit's dry region.”

The group’s research was motivated by a 2015 trip to Taiwan. Hosoi leads MIT’s STE@M (Sports Technology and Education at MIT), a program that encourages students and faculty to pursue projects that help advance sports technologies. In the summer of 2015, Hosoi brought a group of STE@M students to Taiwan, where they visited several sporting goods makers, including the wetsuit manufacturer, Sheico Group.

“They are interested in sustainability, and asked us, ‘Is there a bioinspired solution for wetsuits?’” Hosoi says. “Surfers, who go in and out of the water, want to be nimble and shed water as quickly as possible when out of the water, but retain the thermal management properties to stay warm when they are submerged.”

When the group returned from the trip, Hosoi assigned the problem to Nasto, encouraging her to find examples in nature that could serve as a design model for warm, dry, streamlined wetsuits. In her literature searches, Nasto zeroed in on semiaquatic mammals, including beavers and sea otters. Biologists had observed that these animals trap, or “entrain” air in their fur.

Nasto also learned that the animals are covered in two types of fur: long, thin “guard” hairs, that act as a shield for shorter, denser “underfur.” Biologists have thought that the guard hairs keep water from penetrating the underfur, thereby trapping warm air against the animals’ skin. But as Nasto notes, “there was no thorough, mechanical understanding of that process. That’s where we come in.”

The team laid out a plan: Fabricate precise, fur-like surfaces of various dimensions, plunge the surfaces in liquid at varying speeds, and with video imaging measure the air that is trapped in the fur during each dive.

To make hairy surfaces, Nasto first created several molds by laser-cutting thousands of tiny holes in small acrylic blocks. With each mold, she used a software program to alter the size and spacing of individual hairs. She then filled the molds with a soft casting rubber called PDMS (polydimethylsiloxane), and pulled the hairy surfaces out of the mold after they had been cured.

In their experiments, the researchers mounted each hairy surface to a vertical, motorized stage, with the hairs facing outward. They then submerged the surfaces in silicone oil — a liquid that they chose to better observe any air pockets forming.

As each surface dove down, the researchers could see within the hairs a clear boundary between liquid and air, with air forming a thicker layer in hairs closer to the surface, and progressively thinning out with depth. Among the various surfaces, they found that those with denser fur that were plunged at higher speeds generally retained a thicker layer of air within their hairs.

From these experiments, it appeared that the spacing of individual hairs, and the speed at which they were plunged, played a large role in determining how much air a surface could trap. Hosoi and Nasto then developed a simple model to describe this air-trapping effect in precise, mathematical terms. To do this, they modeled the hair surfaces as a series of tubes, representing the spaces between individual hairs. They could then model the flow of liquid within each tube, and measure the pressure balance between the resulting liquid and air layers.

“Basically we found that the weight of the water is pushing air in, but the viscosity of the liquid is resisting flow (through the tubes),” Hosoi explains. “The water sticks to these hairs, which prevents water from penetrating all the way to their base.”

Hosoi and Nasto applied their equation to the experimental data and found their predictions matched the data precisely. The researchers can now accurately predict how thick an air layer will surround a hairy surface, based on their equation.

“People have known that these animals use their fur to trap air,” Hosoi says. “But, given a piece of fur, they couldn’t have answered the question: Is this going to trap air or not? We have now quantified the design space and can say, ‘If you have this kind of hair density and length and are diving at these speeds, these designs will trap air, and these will not.’ Which is the information you need if you’re going to design a wetsuit. Of course, you could make a very hairy wetsuit that looks like Cookie Monster and it would probably trap air, but that's probably not the best way to go about it.”

José Bico, a lecturer at ESPCI (the City of Paris Industrial Physics and Chemistry Higher Educational Institution) in Paris, points to another application for the group’s results: the process of industrial dip-coating, by which surfaces are dipped in polymer to achieve an even, protective coating.

“Air or liquid entrainment is a big deal in a lot of industrial coating applications,” says Bico, who was not involved in the research. “For instance, many treatments involve dipping of an object in a bath of some liquid. In that case, you do not want air to remain trapped. This model tells how fast one may [dip] before trapping air.”

This research was funded, in part, by the National Science Foundation.